The project is located in Ontario just west of the Quebec-Ontario border and is easily accessible via public and forestry roads.

The property covers a 20 km portion of the felsic unit that hosts the former producing Normetal mine. The Normetal Mine, located relatively close to the provincial boundary but in Quebec, produced 10 Million tonnes grading 2.2% Cu, 5.4% Zn, 0.53 g/t Au and 44.5 g/t Ag over a 37 year mine life from 1938 to 1975. The deposit was found by surface prospecting and mined from surface to a depth of 2.4 kilometres.

Yorbeau owns a 100% in the property which consists of 18 claims. 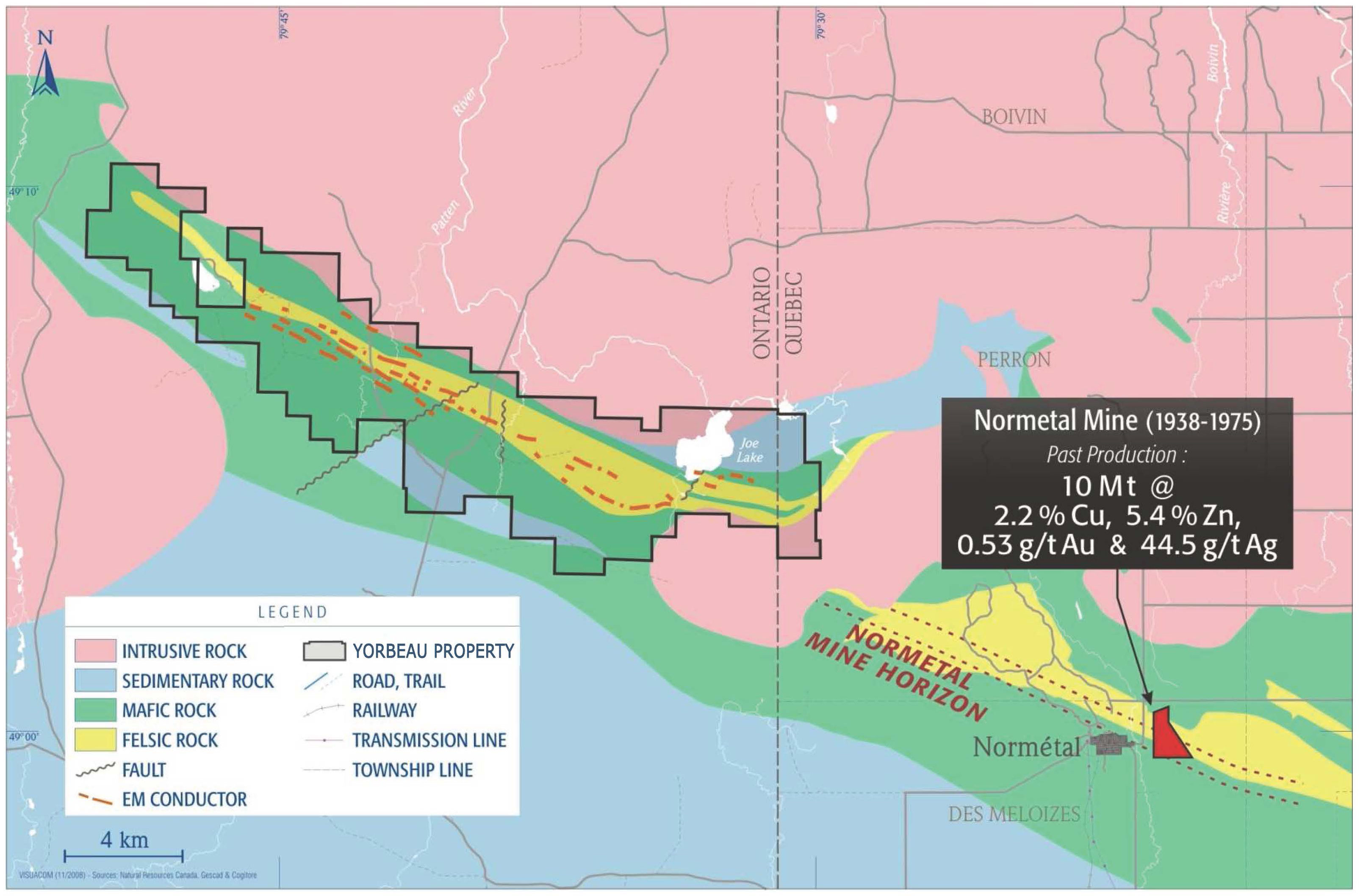 Extensive near surface exploration has been carried out in the Normetal belt, especially on the Quebec side. However, there has been significantly less exploration activity on the Ontario side of the belt. In spite of the fact that VMS deposits typically occur as clusters of deposits, such as in the Noranda, Val d'Or, Matagami and Mattabi camps, no other deposit has yet been found in the Normetal belt. Yet, the scale of the alteration system, the value of the old Normetal deposit itself, and the nature and chemical signature of the felsic volcanics hosting the mine are consistent with the earmarks of a prolific VMS camp which may host several deposits. Previous drilling in the 1960's on a portion of the property yielded anomalous zinc and copper values associated with a 3 kilometre long altered zone of favourable rhyolitic rocks.

Historically, the Normetal West project area has never been held as a single entity by any mining company but, instead, has been held as a large number of small independent projects by a number of companies, which may have precluded global understanding of the volcanic edifice and of mineralizing systems hosted in it. This Yorbeau property position thus offers a rather unique opportunity to explore with the newest technologies over 20 kilometres of an easily accessible and prolific mineralized belt.

Detailed mapping work carried out at Normetal West by Cogitore Resources confirmed the presence of the same volcanic units as those hosting the former Normetal mine. In addition, a recent (2008) deep penetrating geophysical survey (InfiniTEM) has detected several good conductors located within and at the top of the felsic units and which may reflect sulphide mineralization. The project has reached the drilling stage and several drill targets have already been identified.