MONTREAL Sept. 17, 2020 - Yorbeau Resources Inc. (TSX: YRB) ("Yorbeau" or the "Company") is pleased to report that a geological compilation and a borehole geophysics modeling deliver high-priority targets along the highly prospective Lemoine horizon. These targets are located approximately 400 metres down dip of the mined-out deposit and 800 metres from the surface.

In 2013, hole LEM-63W was designed to make a follow-up on the 12L-27 intersection but did not reach the target due to excessive deviation. Although, borehole geophysics in this hole detected two off-hole conductors. Geophysical modeling made by INTER Géophysique shows a strongly conductive plate of 250 Siemens (target #1) located 70 metres below 12L-27. In addition, a second conductor of 70 Siemens (target #2) was detected along the Lemoine horizon, which has been shifted by a mafic dyke (Figure 3). These conductors are open at depth.

Two holes for approximately 2500 metres are planned to test these targets and borehole geophysics will be completed. A drill permit has been received and Miikan Drilling Inc. will mobilize to the property in the coming weeks as soon as a large drill rig is available.

G. Bodnar Jr., Company president commented: "The board of directors unanimously approved, in accordance with Yorbeau's strategic advisor, this exciting drilling program. A new high-grade VMS discovery at Lemoine could be a game changer for Yorbeau's Chibougamau projects including Scott. We can't wait to test these targets in the next few weeks.''

The Rouyn Property, wholly-owned by the Company, contains four known gold deposits in the 6–km–long Augmitto-Astoria corridor situated on the western portion of the property. The Company signed a definitive agreement in December 2018, whereby IAMGOLD has the option to acquire a 100% interest in the Rouyn property, and a major drilling program is underway. Two of the four deposits, Astoria and Augmitto, benefit from substantial underground infrastructure and have been the subject of technical reports that include resource estimates and that were filed in accordance with Regulation 43-101. In 2015, the Company expanded its exploration property portfolio by acquiring strategic base metal properties in prospective areas of the Abitibi Belt of Quebec that feature infrastructure favourable for mining development. The newly acquired base metal properties include the Scott Project in Chibougamau, which bears important mineral resources (see the press release dated March 30, 2017) and on which a positive Preliminary Economic Assessment was recently completed. 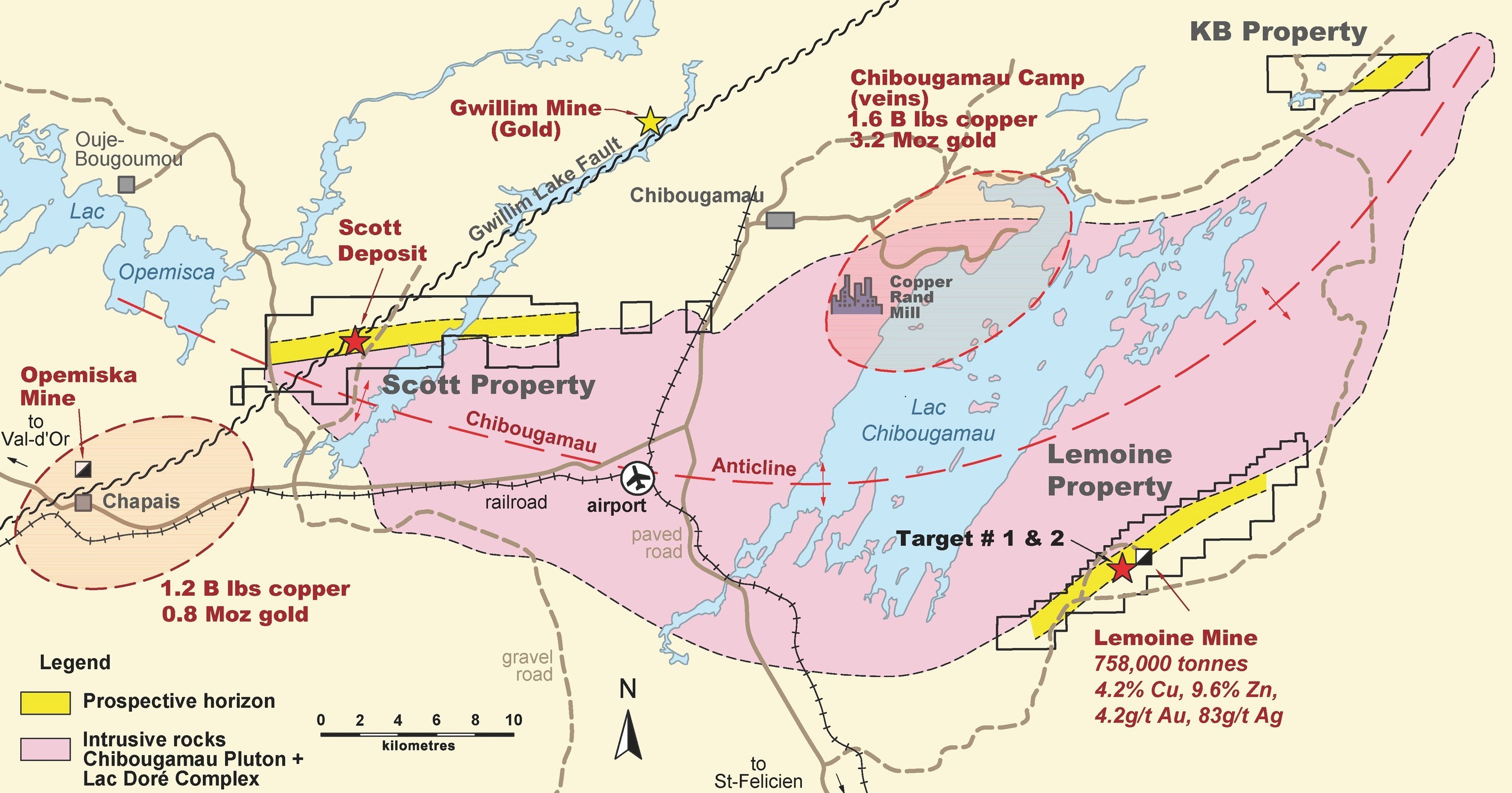 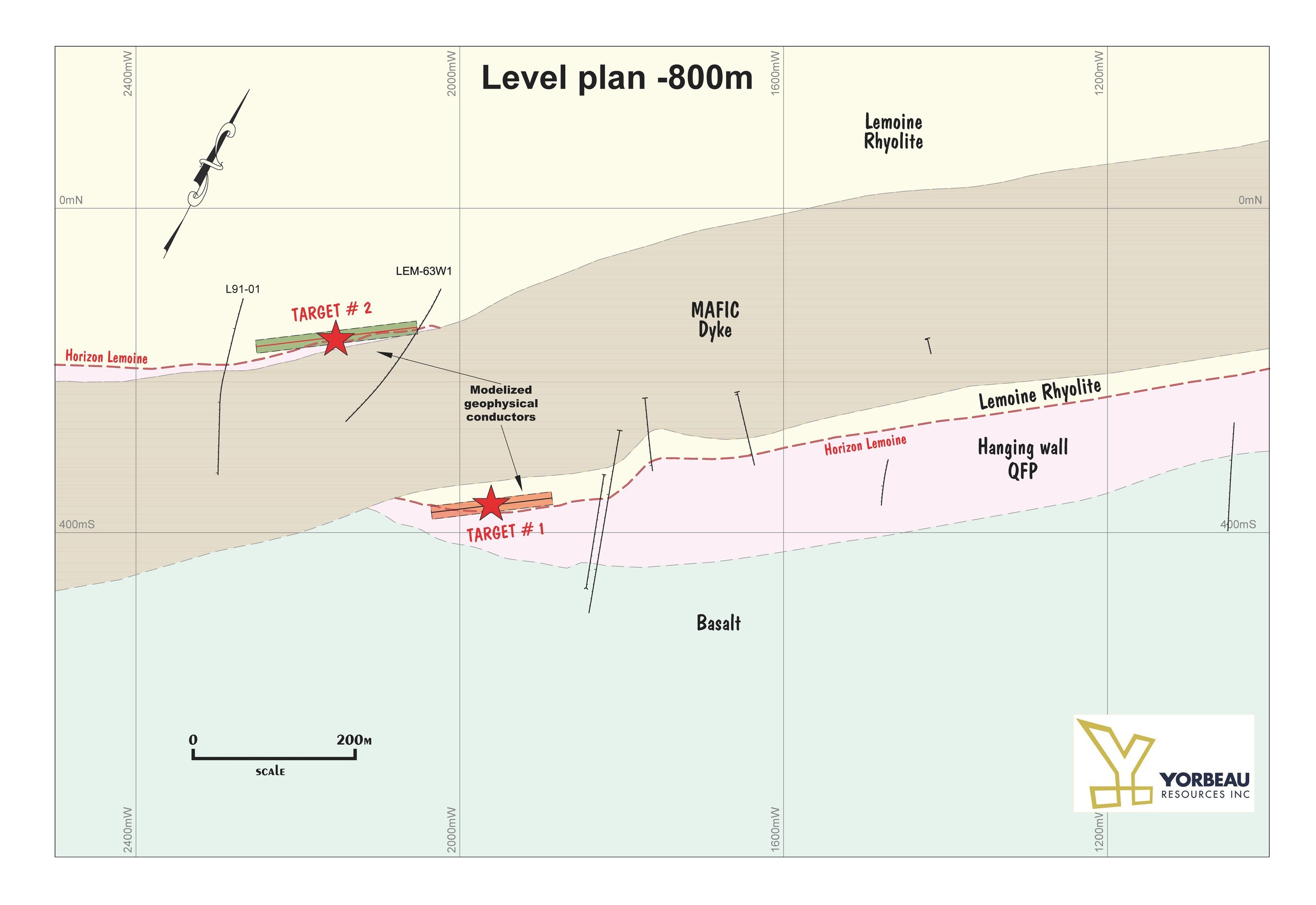 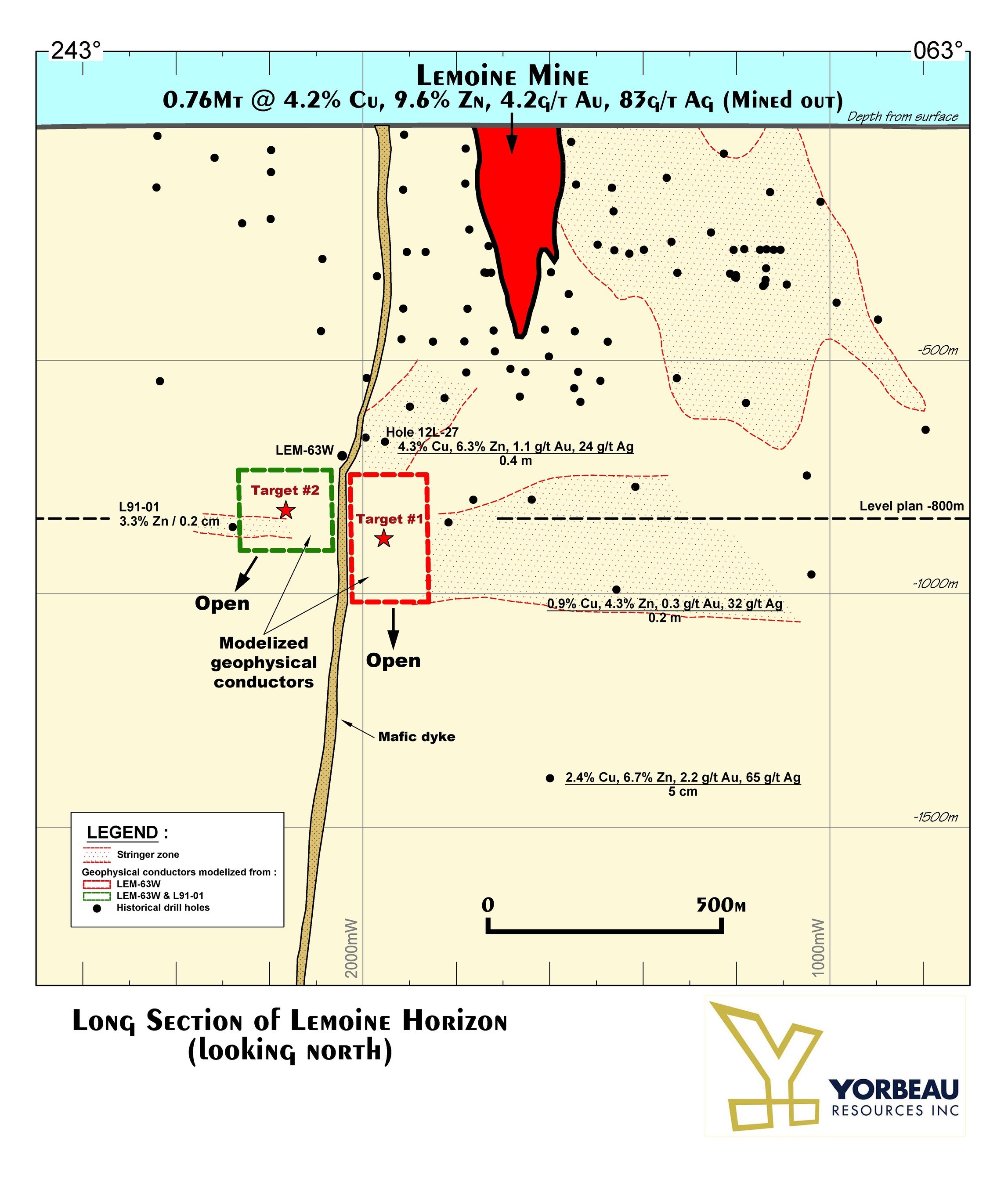 Figure 3: Level plan -800m showing a discordant mafic dyke crosscutting and shifting the Lemoine
horizon. Target #1 is located on the south side of the dyke and the target #2 is located on the
north side.