Yorbeau Announces Further Positive Assay Results from the Drilling Programs on the Rouyn Project, Quebec, Including 27.8 g/t Au over 9.8 Metres

MONTREAL, May 13, 2020 - Yorbeau Resources Inc. (TSX: YRB) ("Yorbeau" or the "Company") is pleased to report that its partner IAMGOLD Corporation ("IAMGOLD") released today the assay results from diamond drilling programs completed on the Astoria area and on the Lac Gamble Zone at the Company's Rouyn Gold Project. The project is located 4 km south of Rouyn-Noranda, Quebec, and approximately 45 kilometers southwest of IAMGOLD's Westwood mine.

The assay results reported herein are provided in Tables 1 and 2 below and include the following highlights (two longitudinal sections illustrating the drilling program on the Lac Gamble and the Astoria area are attached to this news release):

The objective of the diamond drilling program in the area of the historic Astoria deposit was to test selected exploration targets to evaluate continuity of mineralization for the potential to outline a resource.

The objective of the diamond drilling program on the Lac Gamble Zone was to continue a systematic infill drilling program at nominal 50 x 50 metre drill centres in the upperpart of the zone to support a future resource estimation. In addition, lateral extensions were also targeted to evaluate the potential to expand the zone.

Both drilling programs successfully intersected the targeted sheared Cadillac-Piché corridor which hosts the mineralized zones. The Lac Gamble and Astoria mineralized zones are associated with alteration varying from several metres to greater than ten metres in width hosted in the ultramafic rocks of the Piché Group, exhibiting variable carbonatization, fuchsite, silicification, crosscut by a network of white quartz and brown tourmaline stockwork veins and breccias. Gold mineralization occurs as small specks of visible free gold associated with minor sulphides in quartz-tourmaline veinlets. In the Astoria area mineralized zones are also intersected at the contact with the sedimentary sequences bordering the Piché Group and contains grey quartz veinlets with up to 10% disseminated to narrow massive bands of Arsenopyrite adjacent to the veins.

"Results reports today are highly encouraging and we are very satisfied by the work accomplished in partnership with IAMGOLD on the project. At Gamble, delineation drilling continues to show continuity of mineralization with high-grade intercepts over significant width," commented Sylvain Lépine, General manager Explorationof Yorbeau. "We are looking forward to do additional exploration drilling, especially in Astoria sector where good potential to delineate additional resources has been identified."

In a separate press release on the current results, Craig MacDougall, Senior Vice President, Exploration for IAMGOLD, stated: "We continue to be pleased with the positive results obtained from our infill and evaluation drilling programs, especially those from our priority target at Lac Gamble which we are working to advance to a formal resource estimate.  The Rouyn Gold project provides IAMGOLD with an opportunity to delineate satellite resources with the objective of supplementing production at our Westwood operation and utilizing our existing infrastructure and excess mill capacity. I want to especially acknowledge the efforts of the exploration team who had to contend with the sudden impacts of the COVID-19 crisis and were able to suspend drilling operations in an orderly way on very short notice. We look forward to resumption of our exploration activities, which will be done progressively in a safe manner following confirmation by the government of Quebec that exploration activities may resume."

In response to the global COVID-19 crisis, the Company with its partner IAMGOLD, immediately activated appropriate actions to ensure a coordinated response. All exploration drilling and field activities were temporarily suspended as directed by the government of Quebec and will resume subject to the guidelines and approval of the required government authorities and when judged safe to do so.

The assay results from the drilling programs are being compiled and integrated with the existing geological, geochemical and structural information to support the development and refinement of a preliminary deposit model.  This work will also be used to support the completion of a mineral resource estimation of the Lac Gamble zone currently in planning.

As described above, the planned 2020 Lac Gamble drilling program was suspended before completion. Timing for the resumption of the program will be assessed as conditions allow. The 2020 exploration program was designed to also evaluate other selected exploration targets in the area of the historic Astoria deposit and other identified satellite targets with up to a further 5,000 metres of diamond drilling planned. All pending assay results from drilling completed to date on Lac Gamble will be reported once they are received, validated and compiled.

About the Rouyn Gold Project

The Rouyn Gold Property is located about 4 km south of Rouyn-Noranda, Quebec. With a long history of mining, the city of Rouyn-Noranda offers many advantages for mining and exploration, including political and social stability, good access and infrastructure, skilled mining personnel, and one of the most mining-friendly jurisdictions in the world.

The property covers a 12-kilometre stretch of the Cadillac-Larder Lake Break and contains four known gold deposits along the 6-km Augmitto-Astoria corridor situated on the western portion of the property. Two of the four deposits, Astoria and Augmitto, benefit from established underground infrastructure and have been the subject of technical reports that include resource estimates that were previously filed in accordance with Regulation NI 43-101.

IAMGOLD signed a definitive option agreement in December 2018, whereby IAMGOLD has the option to acquire a 100% interest in the Project by making scheduled cash payments totaling C$4 million and completing exploration expenditures totaling C$9 million over a four year period. Exploration programs must include the completion of a minimum of 20,000 metres of diamond drilling within the first two-years of the option. By the end of the expenditure period, IAMGOLD must complete a NI 43-101 compliant resource estimate, after which IAMGOLD, at its election, can purchase a 100% interest in the Project, subject to a 2% net smelter return production royalty, by paying Yorbeau the lesser of C$15 per resource ounce or C$30 million. IAMGOLD is in the second year of the option agreement.

The drilling results contained in this news release have been prepared in accordance with National Instrument 43-101 Standards of Disclosure for Mineral Projects.

Work at Yorbeau is carried out under the supervision of Sylvain Lépine, M.Sc, P. Geo. He is a qualified person (as defined by NI 43-101) and has reviewed and approved the content of this release.

The design of the drilling program and interpretation of results is under the control of IAMGOLD's and Yorbeau's geological staff, including qualified persons employing strict protocols consistent with NI 43-101 and industry best practices. The sampling of, and assay data from, the drill core is monitored through the implementation of a quality assurance - quality control (QA-QC) program. Drill core (NQ size) is logged and samples are selected by geologists and then sawn in half with a diamond saw at the project site. Half of the core is retained at the site for reference purposes. Sample intervals may vary from half a metre to one and a half metres in length depending on the geological observations.

Half-core samples are packaged and transported in sealed bags to AGAT laboratories in Val-d'Or, Quebec, and Mississauga, Ontario. Samples are coarse crushed to a -10 mesh and then a 1,000 gram split is pulverized to 95% passing -150 mesh. AGAT prepare analytical pulps at their facilities located in Val-d'Or and process the pulps at their Mississauga laboratory which is ISO / IEC 17025:2005 certified by the Standards Council of Canada. Samples are analyzed using a standard fire assay with a 50 gram charge with an Atomic Absorption (AA) finish. For samples that return assay values over 3.0 grams per tonne, another pulp is taken and fire assayed with a gravimetric finish. Core samples showing visible gold or samples which have returned values greater than 10.0 grams per tonne are processed with a protocol involving fine grinding of the entire sample, followed by metallic screen analysis of the entire pulverized material. Insertion of duplicate, blanks and certified reference standards in the sample sequence is done in all drill holes for quality control.

The Rouyn Property, wholly-owned by the Company, contains four known gold deposits in the 6‑km‑long Augmitto-Astoria corridor situated on the western portion of the property. The Company signed a definitive agreement in December 2018, whereby IAMGOLD has the option to acquire a 100% interest in the Rouyn property, and a major drilling program is underway. Two of the four deposits, Astoria and Augmitto, benefit from substantial underground infrastructure and have been the subject of technical reports that include resource estimates and that were filed in accordance with Regulation 43-101. In 2015, the Company expanded its exploration property portfolio by acquiring strategic base metal properties in prospective areas of the Abitibi Belt of Quebec and Ontario that feature an infrastructure favourable for mining development. The newly acquired base metal properties include the Scott Project, which bears important mineral resources (see the press release dated March 30, 2017) and on which a positive Preliminary Economic Assessment was recently completed. 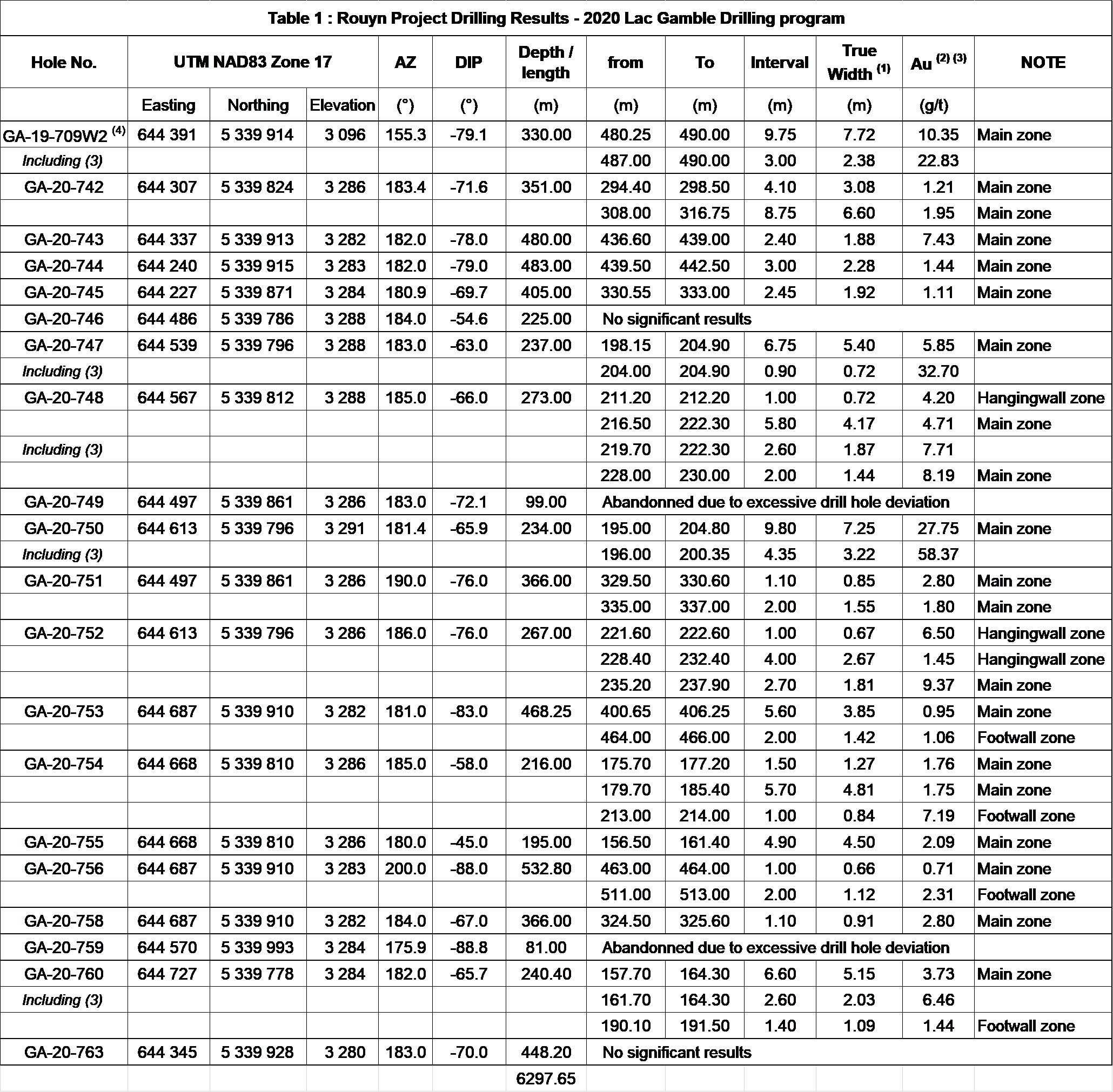 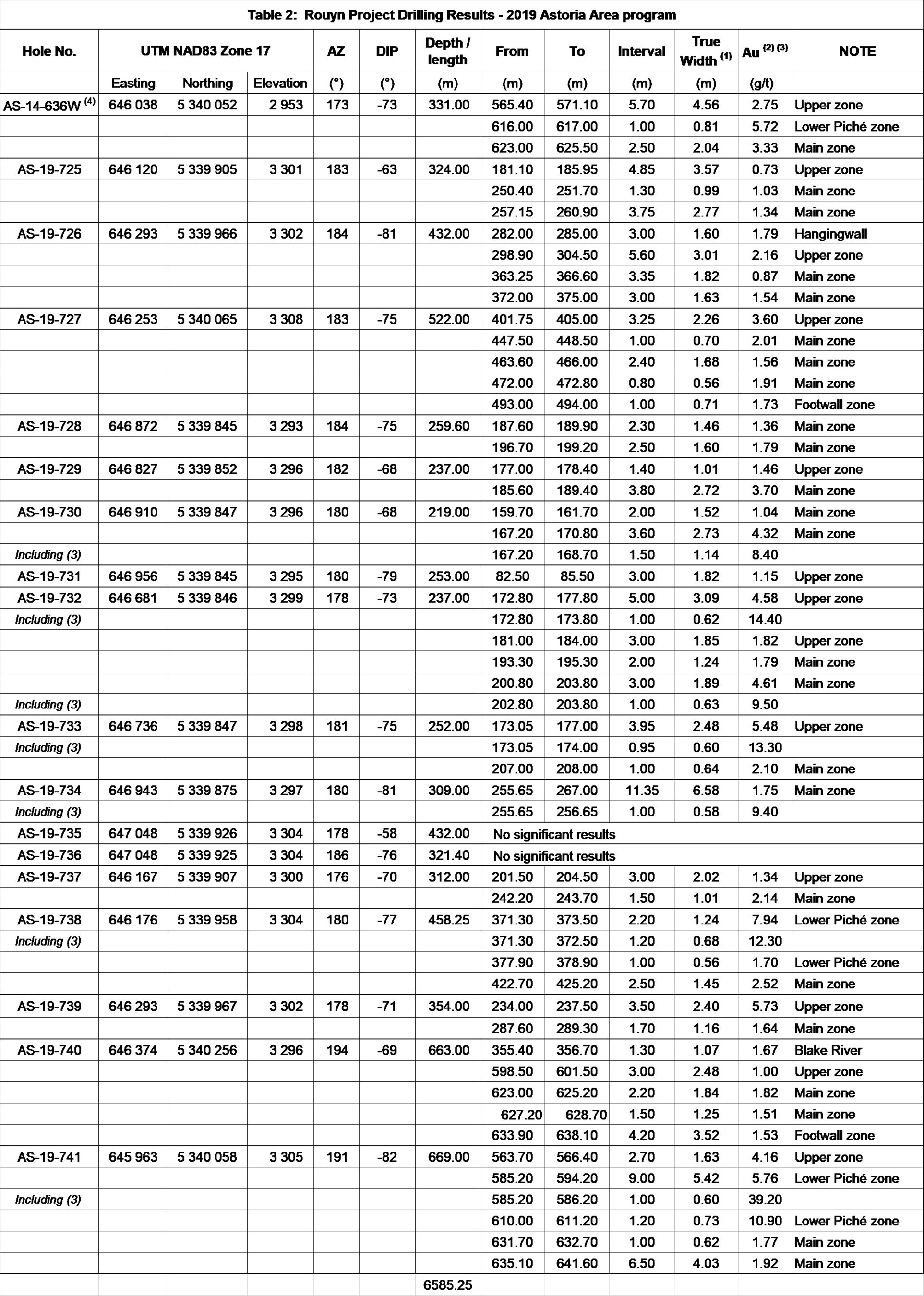 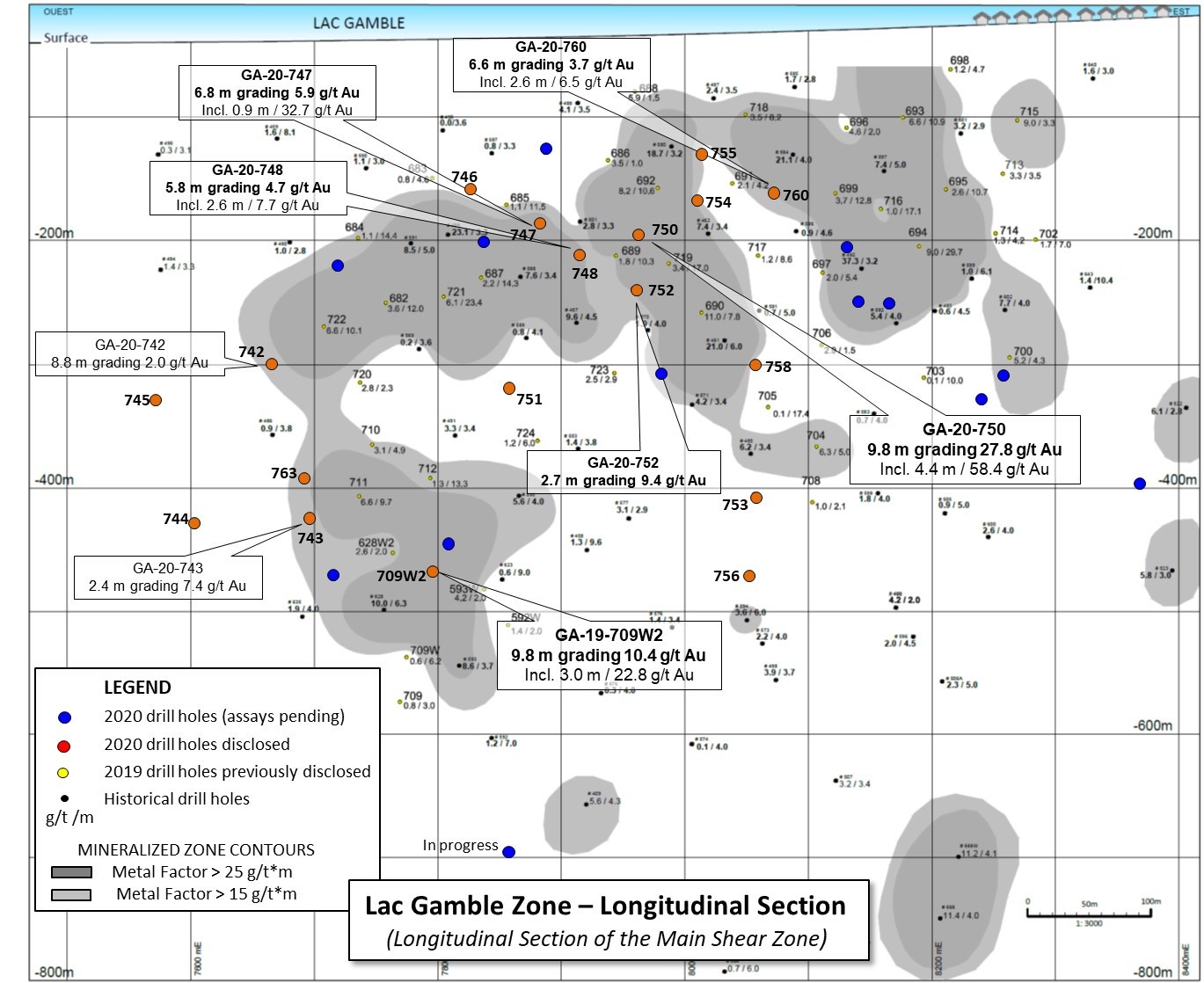 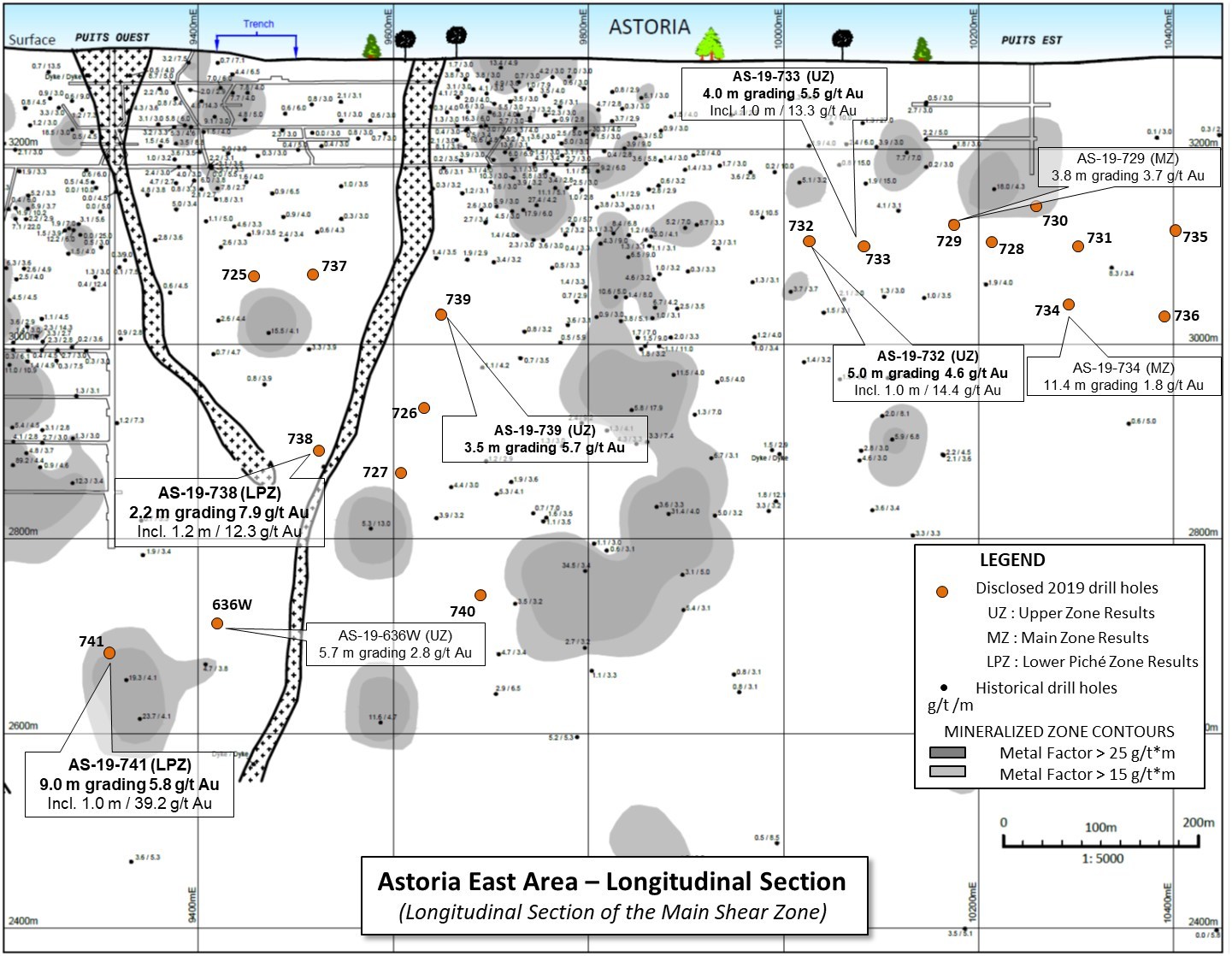