Montreal, October 29, 2019 – Yorbeau Resources Inc. (TSX: YRB) ("Yorbeau" or the "Company") is pleased to announce that diamond drilling has commenced at its KB project in the Chibougamau area of Quebec.

The KB project is highly prospective for zinc and copper due to the presence of an historic high grade prospect associated with a massive sulphide stratigraphic horizon hosted within mafic and felsic volcanics. The property appears to have a geological setting similar to that found at the past producing high grade Lemoine mine and at Yorbeau’s Scott project, including high grade VMS-style mineralization, presence of felsic tuffs, and potential for high synvolcanic heat flow resulting from the proximity of the Lac Doré (synvolcanic) Complex (Figure 1). 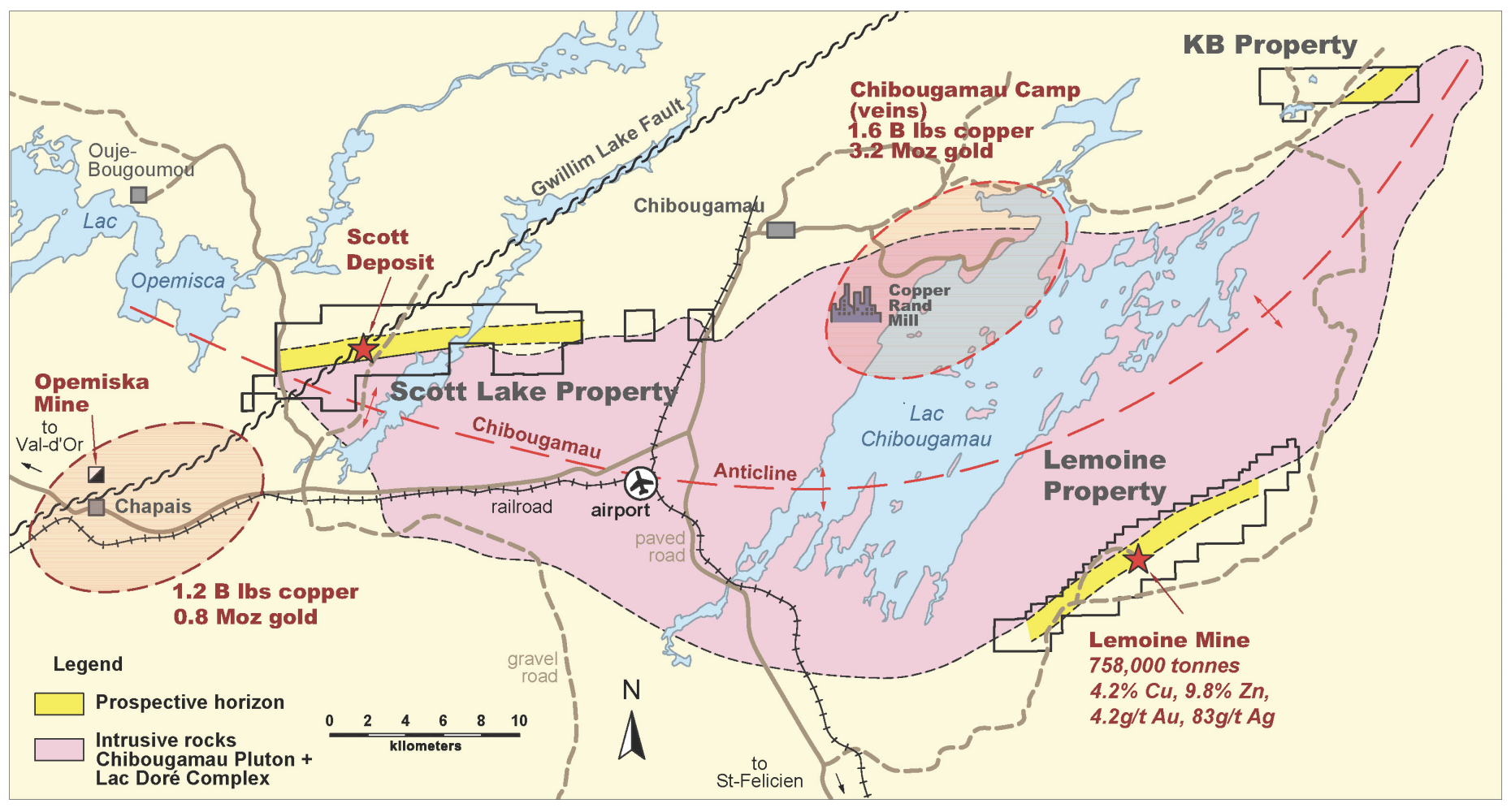 According to Government files, historical drilling done by Icon Sullivan in 1965 yielded up to 1.9% copper and 11.0% zinc over a core length of 1.0 metre of massive sulphides.  Since acquisition of the project in late 2017, the Company completed an airborne VTEM electromagnetic survey which identified numerous conductors, including a 2 km long strong conductor which coincides locally with the main showing. Detailed mapping was done around the conductors in order to select drill targets. Yorbeau’s technical team considers that the quality of the conductors, combined with their geological setting, makes them high priority exploration targets.

One drill rig is currently in operation on the project and nine short drill holes totalling about 1,600 metres are planned along a conductive zone that covers over 1.5 km of strike length.

Gérald Riverin, Company president commented: “We are very excited to be drilling again in the Chibougamau camp. With the Scott project hosting important zinc and copper resources, base metal prospects in the Chibougamau mining camp with features similar to the Scott mineralization become strategic for the Company. In spite of local high grade zinc mineralization at surface, the KB project had never been drilled below 150 metres vertical, and has yet to be explored using modern volcanogenic massive sulphides concepts. Our technical team has developed considerable expertise in this type of mineralization in the Chibougamau Camp, and the Company is looking forward to completing a first drilling program on this project.”

Work at Yorbeau is carried out under the supervision of Gérald Riverin, Ph.D., P. Geo. He is a qualified person (as defined by NI 43-101) and has reviewed and approved the content of this release.

Yorbeau Resources is a diversified mining exploration company with an enviable portfolio of exploration properties in Quebec. The exploration projects comprise both gold and base metal projects, and the strategic focus of the Company is on projects located in areas easily accessible and with infrastructure. The wholly-owned Rouyn Property is the Company’s main gold asset and contains four known gold deposits in the 6 km long Augmitto-Astoria corridor situated on the western portion of the property. The Company signed a definitive agreement in December 2018, whereby IAMGOLD has the option to acquire a 100% interest in the Rouyn property, where very encouraging drilling results were obtained in 2019. The base metal assets include the Scott Project, which bears important mineral resources (see the press release dated March 30, 2017) and on which a positive Preliminary Economic Assessment was recently completed.